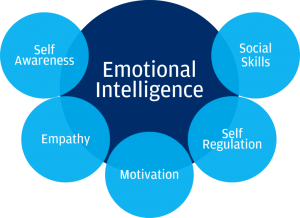 Earlier this week, I read an article about Emotional Intelligence and the importance of its application in business. The article reminded me of a conversation I’d had with a new client not so long ago.

My new client contacted me after attending a Spinning class at one of the ‘corporate’ gym brands. He had wanted to try the class as part of a free ‘taster’ experience which had been offered, primarily as a way of enticing new memberships. He’s in his late 40’s, and his aim was to get back into fitness which had lapsed over the years. He had wanted to join a gym in order to participate in some of the group classes, as well as having access to a swimming pool.

He explained to me how, on arrival at the Spinning class, clearly new and unsure of exactly what it entailed, he was met by friendly, clearly regular, attendees who reassured him and made him feel very welcome. The instructor then arrived and asked if there were any newcomers – my new client raised his hand. But there was no friendly welcome from the instructor, instead his unsmiling face looked at my client and asked whether he thought he should be in the group. Quite taken aback by the question, he explained that he’d seen the class advertised for Beginners as well as Intermediate level participants; the instructor confirmed that it was but stated that most of the participants were regular. My new client had then asked, “should I go?” to which one of the attendees assured him that he should stay. He did stay, but then hurriedly left and never went back to the gym again.

My client’s experience had left him feeling inferior, unwanted, and embarrassed, and I was appalled as I listened to the story. What was supposed to be a pleasurable, free experience intended to encourage him to sign up for membership left him feeling worthless and inadequate – not a way for any business to generate customers, let alone in an industry whose raison d’etre is to lead the way in helping people to be fitter and healthier for a fuller life.

In less than an hour the Spinning instructor had lost the gym a great deal of potential revenue; lost the opportunity for referred business and also compromised the gym’s reputation. And it was completely avoidable.

Had the Spinning instructor demonstrated any amount of Emotional Intelligence in his dealings with a new participant in his group, then the negative situation may have turned out to be quite the opposite.

Emotional Intelligence  – in a very broad definition – encompasses self-awareness, self-management, social awareness (empathy) and the ability to effectively manage relationships. To me, those qualities are not a ‘nice to have’, but absolutely essential in my fitness business.

As a proud, and vested fitness professional I was sad to hear the man’s story, but I was also happy that he’d contacted me, and I knew I could work with him to help him regain his fitness and strength. He has gone on to re-discover his love of running; he uses a local swimming pool without the need for a membership and has no intention of going to a gym again.

For me, the moral of this story is that you may be the most highly qualified, the fittest, the youngest and the most ‘buff’ fitness professional in the world, but that will count for nothing unless you have emotional intelligence, and show that you genuinely care about the people who come to you for help.