They Think It’s all Over…….It is now 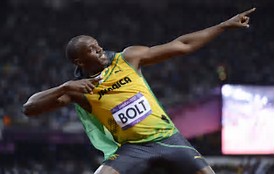 The World Athletics Championships in London were hugely entertaining.

There were thrills, spills, triumphs and crushing disappointments, but that’s the nature of the sport.

For me, it was important to watch Usain Bolt compete on the world stage for the last time. I have followed his career since 2011, and used his victory pose as the logo for my fitness business.

His performances in the individual 100 metre and 4 x 100 relay events didn’t follow the script that avid fans like me had written for his farewell event. But, in reality, he had nothing left to prove.

The BBC’s Chief Sports Writer put it very well in his article on Sunday 6th August. “Yet sometimes perfection itself can become hard to understand when it seems to come so easy. In defeat, we can look back at all the glories of the past nine years and see that none were preordained and all claimed through an unprecedented blend of latent talent and unremitting hard work.

Bolt has done so much on the track that no other human has ever managed. That his last individual race revealed him to have a few mortal flaws after all should not undermine his status.

There will be other runners who will run as fast, and faster but, for character and charisma and everything he brought to the sport I love, I don’t think I’ll see anyone like Usain Bolt in my lifetime.