The Power Of Positivity 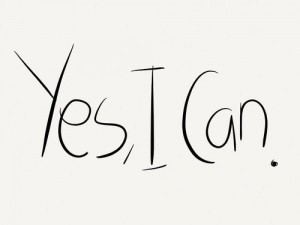 Positivity in all aspects of our lives is so important, but we all have a little voice in our heads telling us that we can or can’t do something – call it what you will, Self-Talk or the Internal Voice it amounts to the same thing, and it provides a running commentary on the activities of our lives. I always find that my internal voice is loudest at times when I feel the greatest fear. For example ‘many moons’ ago on the way back from a holiday in the Lake District I remember diverting to Blackpool to ride ‘The Big One’. On that day, as we sat in the last carriage on the track waiting to set off, I would swear that my internal voice was suggesting that climbing off the back and taking my chances on the track was a better option than going through with the ride – not to be recommended me thinks! The whole experience would have been a lot more fun if I could have changed that voice to a positive one which said something like “this is going to be exhilarating” – because it really was exhilarating!

In my example, I had a negative internal voice, but the good thing was that I overcame it, and went through with what I’d set out to do. But it doesn’t always work that way, and sometimes the voice prevents us from achieving important things, or from reaching our true potential – this can be destructive to self-confidence, and may even have a knock on effect beyond the situation itself.

If the internal voice says “I can’t” often enough, then this belief becomes lodged in the psyche and is self- fulfilling. An example; I was running a circuit about a week ago, and had in mind the time I wanted to achieve for the total distance. However, at my final ‘split time’ check I could see that I was behind schedule. My internal voice said “you can’t make up the time”, and I made the mistake of listening to it, so stopped running altogether without even trying to make it up. My internal voice had completely sabotaged my attempt at improving my time for the distance. Just typing that highlights the ridiculousness and utter disappointment of it, but also the power of an internal voice. If I’d looked at the split time, and my internal voice had said “you’re a bit behind, but you can make it up”, I would have kept running, and made the new time I’d set myself to do.

Ideally, we need to have simple, positive and doable mantras for every aspect of our lives if we want to achieve what we’ve set out to do. And when we’ve achieved it, we can then sit back and bask in the warm after-glow of satisfaction for a job well done, a goal achieved, or even a fear conquered.

As my own example of a running goal shows, our internal voices can significantly affect performance, and research by sports psychologists proves that thoughts create beliefs which, ultimately, drive actions. So we should make it a habit to bat away all negative thoughts, and replace them with positive “can-dos”. No one would say that’s easy but, as with most worthwhile things in life, it takes effort and practice……….I’m a work in progress