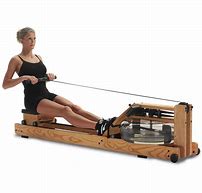 Rowing – A flavour of Superhuman Fitness

Treadmills and exercise bikes have long been features of both commercial and home gyms, but I have always been a fan of rowing machines. Well, when I say a fan what I mean is that, from personal experience, I can attest to the huge physiological effort involved in rowing correctly – and rowing is, still to this day, the only time in my life when I have ever felt close to fainting. I certainly don’t advocate rowing until you feel faint, but the benefits of this activity are enormous.

My respect for rowing machines dates back to the 1990’s, long before re-training for my career in the fitness industry. But now it seems that the wider industry has finally woken up to this previously overlooked piece of equipment. So much so that a swathe of boutique rowing studios have been popping up in London, New York and elsewhere, and predictions are that rowing classes could soon rival spinning as the new go-to group activity. So why is this? For all of the reasons I have always used a rower whenever possible – if you want to get fitter, stronger or burn calories quickly, then there are few better exercises you can spend your time doing.

When the world’s best athletes descend on Tokyo in 2020 for the next Olympic Games, the fittest among them won’t be the marathon runners, cyclists, swimmers, or triathletes. It will be the rowers.

When it comes to maximal aerobic capacity, which is the measure of a body’s efficiency at delivering oxygen to the working muscles, then elite rowers have some of the highest scores ever recorded, and their lung capacity is astonishing. This is because rowing uses virtually every muscle in the body.

The rowing stroke begins with the ‘catch’ and an explosive drive of the legs utilising the quads, calves, and glutes to extend the knees and hips. Once those major muscle groups have fired, the back, obliques and abdomen engage around the core to stabilise the trunk before the traps, lats and arm muscles complete the movement, drawing the handle in to the body at the ‘finish.’

The full-body exertion involved in rowing places huge demands on both the aerobic and anaerobic systems of the body. The more stress placed on the body; the more adaptation is forced to occur. Over time, the body creates more capillaries to carry blood and oxygen to working muscles, the muscles around the heart strengthen and grow and the lungs become more efficient at extracting oxygen from the air.

It’s no surprise then that, given the high volumes of rowing training elite rowers must complete, they achieve impressive levels of VO2 max – the maximum rate at which the heart, lungs, and muscles can effectively use oxygen during exercise.

For we, ‘mere mortals’, the good news is that we don’t have to be an Olympic athlete or devote a huge amount of time to benefit from the substantial fitness gains rowing provides. Because it’s so taxing on the whole body, it’s a very time efficient way to improve fitness, and in as little as 20 minutes, you’ll have completed a strenuous cardio workout.

Rowing also has the benefit of being a low impact exercise, which is easier on the joints than running, and so is ideal for people suffering weakened or injured joints.

We can’t all be superhuman like the Olympic rowers, but if you’re able to use a rowing machine on a regular basis, and you do it right, you’ll certainly get a flavour of what being a superhuman feels like.